To mark the 50th anniversary of BMW’s M Performance model, they have, of course, produced something spectacular. This expressive and powerful vehicle is the combination of the BMW X and M. This is the first plug-in hybrid M model and boy are we excited for its production. From the outset, we can see that this car is going to be mean. Its muscular dynamics create a powerful and agile presence. Even just from the press release photos, we see the sharp and precise lines from front to rear end. We expect this vehicle to be big, powerful, and most importantly, emission-friendly. However, we know the downfall of this ask is…. The price. It’s expected that the BMW XM’s price is to be around £120,000. It’s pricey, we know, but we can’t expect anything less from the auto industry in the 21st century, especially with a high-power hybrid SUV.

As this is an anniversary car, we expect to be wowed, and BMW has done just that. It has been said that the XM can be an electric drive and also have its newly developed 4.4-litre V8 unit. Its power output when driving with the petrol engine and electric motor in combination is 750bhp and 1000Nm. Incredibly impressive on its own. But when you add the sound element to this vehicle we really do see how and why this car is special. It is silent and also nearly emission-free. In terms of comparing this vehicle to others, it has the exact same power output as the Lamborghini Urus! Insane right? Whilst beating the Audi RS Q8 by a mile. As this is all just speculation, it is expected that during the physical production of the BMW XM it could very easily be reduced due to safety regulations. However, if BMW manages to keep the bhp the same, then we’ll be in awe. With eight-speed automatic transmission and being a 4-wheel drive, you can expect to rag this car about with some power. So much power that the BMW XM will be able to go 0-02mph in 5 seconds. If the car is kept in full electric mode then the range will reach up to 59 miles. Pretty impressive considering this is a hybrid.

The XM is LWB, meaning even more room for family and friends. Accompanying this is the 23-inch alloy wheels. Which is insanely huge, BMW has taken this car to extreme heights… literally. What strikes you when looking at the vehicle is the exhaust pipes. They are hexagonal tailpipes stacked together in twos. We love this design and cannot wait to see this in person. It adds so much more character to the car. Adding a futuristic sci-fi feel to the XM.  Another exterior element that we have noted is the kidney grille. It has an octagonal contour to emphasize the width. We first saw this kidney grille element in the BMW iX with the self-healing material. So we hope that BMW has incorporated the latter feature too. The headlights are striking. There are triangular lamps on each side of the grille which are the daytime running lights. The main beams are hidden behind a plastic underneath. The headlight space isn’t something we’re a fan of, it looks like the face of the vehicle has 2 sets of eyes, which is kind of odd to look at. In terms of dimensions, the XM is the same size as the X7. Which is huge. 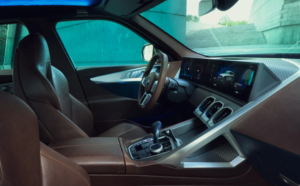 The BMW XM’s interior is prominent, to say the least. With a mix of brand new tech and old-fashioned/traditional materials. Their materials are a combination of leather, velvet, and carbon fibre. With the original teaser images showcasing brown leather seats. This initially reminded us of the classic and vintage premium cars from back in the day. This historical route is a good route to go down, especially for a vehicle produced for an anniversary. 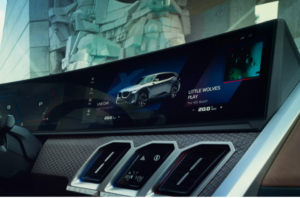 However, we’re not sure how well it goes with the technological aspect of the car. But then BMW released a more recent series of images in which the front interior is black and red. We’re not sure which one is worse, to be honest. The front area interior is driver-centric, meaning fewer distractions when driving and the overall driver experience is increased. 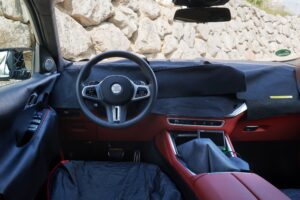 The rear lounge offers comfort and luxury for the passengers. From a glance, you can see how comfortable this cabin is going to be. By using high-quality materials BMW has created a sports seat and couch in what they have described as a ‘petrol colour’. It’s a very unique and futuristic design that we have never seen before. But as SUVs become increasingly more converted for the benefit of the passenger, more design, layout, and aesthetic changes are being made for the utmost comfortability of the passenger. We see this first in the GLS 600 Maybach, with reclining seats and rear-seat entertainment. 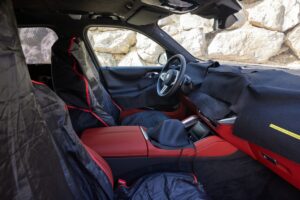 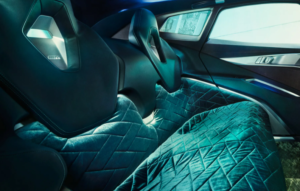 We cannot expect the technology in BMW vehicles to be average anymore. We have seen what BMW is capable of from their tech flagship the iX. The state-of-the-art technology being used in contemporary vehicles is incredible and is definitely one of the many reasons why you would pay a higher amount for a BMW car. Starting off strong with the BMW Curved Display. We’re happy that BMW has decided to keep this display in all of their newer cars as it really did impress us in the iX. The Curved infotainment screen looks incredible with the carbon fibre dashboard and the copper woven details. What we did want to see in this anniversary model vehicle is the rear-seat entertainment screen that we have seen in the BMW i7. That would have really given this car an extreme wow factor as it is a 31.1” BMW Theatre screen with Amazon Fire TV built-in to create a unique panoramic rear-seat entertainment experience. Yet, what they have provided for the rear-seat passenger are comfy petrol seats…We’re not complaining though! As the front interior has changed since the first press release, we could expect the rear-seat cabin interior to change too. So, fingers crossed for rear-seat entertainment! 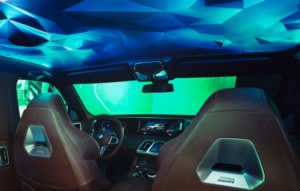 Saving the best till last, we have the new BMW 3D prism roof. The roof is indirectly illuminated from the side through the car’s own ambient lighting system. This sculpted roof is a headliner for the car. With the lights shining on it it has really created a relaxing atmosphere. This experience/feel can be changed through any of the 3 BMW colours. An impressive addition to an already impressionable car.

If you have enjoyed this review then head over to our NEWS section and there are multiple reviews available similar to this one. If you are interested in the BMW XM and want to be able to own one when they are out then check out our CONTACT page – where we will try our best to source and deliver this vehicle when it has been produced. Thank you.

The Maybach-S-class concept has finally come into production as we see some released videos of the vehicle. Here we review everything we love and hate...

The Best Sporty Cars For A First Time Driver

Struggling to find your dream first car? Read our review on the best sporty first cars that the auto industry has to offer!