A Sneak Peek At The Ferrari Purosangue

The first-ever Ferrari Purosangue SUV is expected to be bigger and better than its rivals the Bentley Bentayga, Aston Martin DBX, and the Lamborghini Urus. The Urus took over half of the Lamborghini sales. This is probably where Ferrari has got its inspiration from. SUVs are on-trend and selling like crazy. It would be silly not to take this route. Companies have realised that making cars for customers is crucial and it sells. It’s not all about SUVs being 4×4 and off-roading on muddy mountains and heavy terrain. People like larger cars as they see them as having larger status. Let’s face it. Bigger the car the more money you have. Equally, this is also a practical car for a larger family – if you have the money. Therefore, it’s a perfect idea for Lamborghini to finally get with the times and produce what customers are asking for.

Ferrari’s SUV will be called Purosangue, which is Italian for “Pure Blood”. We feel as though this is to try and convince their customers that they will include everything that they stand for in this new route for Ferrari and to not fret that Enzo is turning over in his grave. With further reassurance from the current CEO stated that the SUV will “exceed our customer’s expectations”. 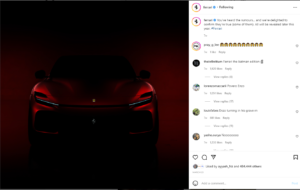 They have teased the release of the Purosangue on their Instagram. With the caption “You’ve heard the rumours… and we’re delighted to confirm they’re true (some of them). And will be revealed later this year”. Accompanied with a video that was posted on May 4th, 2022, the caption being “A new #Ferrari is coming. Born without compromises, unmistakably Ferrari at heart. Powered by our iconic V12 engine. Stay tuned…”, it features extreme close-ups of the engine. The slight teasers they’re leaking to the customers makes this process of waiting all the more exciting. We know that production will begin in 2022 and deliveries are estimated to begin in 2023. So it’s best to put your order’s in now if you want even the slightest chance of getting your hands on this phenomenon. 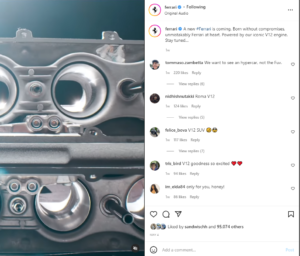 We believe this car will be a hybrid as this is the way that the SUV automotive industry is heading.

This is most likely the reason Ferrari has to prove themselves so much because of their petrol-focused racing cars. Ferrari is good at making super fast cars and what is similar about all of them is the use of the naturally aspirated V12 engine. They have also produced plenty of fast cars with the V8 engine however, they are very well known for producing the V12. But, with the current restriction on emissions, we believe that these restrictions are only going to get tighter. So Ferrari has to adjust with its sister companies. Given its size, I also believe they’d have gone for a V8 hybrid system. As it is Ferrari, are they really going to go for a V6? Probably not. Even if Ferrari goes for a 3.9-litre twin-turbo engine, it would still release more horsepower than the Lamborghini Urus. The Urus after its release made up half of Lamborghini sales. So if Ferrari takes up all of these specs then they are set to take the SUV sector by storm.

The SUV itself has been spotted driving around in camouflage in Italy. It’s hard to visualise the car fully, we can see that the Ferrari SUV is not the typical shape of a normal SUV. This is what needed to be done if you wanted to stand out in this sector of automotive. If you have waited so long not to produce one then everyone will expect you to produce something magnificent. We’re excited to see what the plans are for the infotainment screen and how they can incorporate the history of Ferrari and their aesthetic with innovative new tech. With all this in mind, the debut of the car should be coming very soon and we cannot wait. We will update this blog with any more information we receive!

Thank you for reading this blog and for any more up to date news on the latest cars and our thoughts on them then check out our NEWS page and if you are interested in getting your hands on the Ferrari Purosangue but don’t know how then head over to our CONTACT page and we will sort everything for you!

Here we discuss the beautiful merging of the Maybach and the EQS to create a fully electric luxury SUV.

THE BEST CARS TO BUY FOR YOUR 2022 SUMMER

From convertibles to motorhomes, we tell you the cars of the summer!